The game is in development 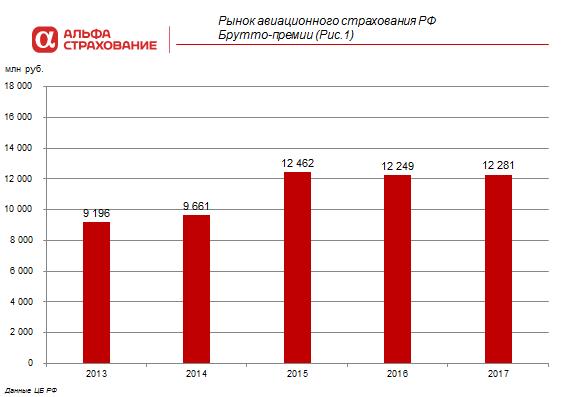 As we can see, the volume of the aviation insurance market in Russia – data of the Central Bank of the Russian Federation include CASCO insurance of aircrafts and insurance of responsibility of air carriers in recent years is approximately on the same level: in the range of 12.2-12.5 billion rubles. Growth in 2014-2015 due to a change of the ruble to the dollar, because the risks airlines are insured in dollars.

Raaks collects statistics in a slightly different format than the securities, including, first, the liability insurance of the airports and other infrastructure companies and the liability of manufacturers of aircraft, and secondly, including operations of reinsurance. Data are provided voluntarily by member companies. To the figures of reinsurance premiums should be treated gently, they can not be summarized, thus attempting to obtain the total market, since the statistics of incoming reinsurance as premiums fall, attracted from abroad, and the operation of mutual reinsurance participants of the Russian market. The first is really extra income for the Russian market, and the second is derived from direct insurance and not an additional award.

Again we see that the growth can not speak. One reason: the growth of the sum insured at risk is balanced by the fall in tariffs.

Comparing the aviation insurance market of the Russian Federation with the world, you will notice that the status and trends of the Russian market Russia is a little different from international.

That is, we – are not worse than in the West? You can be proud of?

Rather, we are no better than in the West!

We have exactly the same problem, and we – just as our colleagues from London, Munich, Zurich and new York – cannot solve problems.

What is the problem?

We work with you in the framework of the corporate plans and budgets. It is understandable that the shareholders of insurance companies to increase. Arguments in favor of growth plans can bring a lot, and they will seem convincing. Then the fact that the insurance market in General is rising that the growing air travel, and inflation expenditure side can be a powerful argument in favor of the need to increase revenue.

Читайте также:  {:en}Greek carrier Ellinair will increase the level of relations with Russia

What we have in practice? Let’s look at …

Elementary example: How we plan and what we get in result?

Accordingly, the company seeks to win another 10 sites from competitors, and reduces the tariffs by 10%.

What is the result? Reducing tariffs by 10%, the company primarily receives 10% decrease in yield on the existing portfolio, that is 9 million instead of 10 million a year earlier. 10 new facilities at a reduced rate give 900,000 R, not 1 million

What else you need to consider:

To think that under the budget with the planned growth was planned and additional costs (e.g., increasing salaries or hiring additional employees). So the expense ratio also grew, and therefore the combined ratio is growing faster than the loss ratio.

Efforts to increase portfolio can not remain without attention and response of competitors. And so, to keep the reduction of tariffs within the planned 10% fail. The actual reduction will be lower. The real picture is even worse.

Needless to say that the task of increasing fees by 10% has a simple and effective solution: is to increase tariffs by 10% on the existing portfolio.

Under this decision, too, can increase costs, including staff salaries, and the difference of this solution from “development” that it will work for the company, and “development” doesn’t work – for the above obvious reasons.

Surprisingly, though, insurers continue hopeless carousel of games in “development”, considering the clear way of increase of tariffs is too difficult or impossible.

Riding the carousel – it’s great; there’s music and lights, and the illusion of forward motion. But we must not get carried away: if you ride for too long, there will be difficulties with balance and orientation in space and health disorder. And in the end, the carousel fail the vehicle if you want to move.

Back to the statistics and see what makes up the insurance premium of the Russian market of aviastroenie. In Fig.3 shows insurance premiums in millions of rubles for the main market segments and also the share of these segments in the total volume of aviation insurance in Russia: 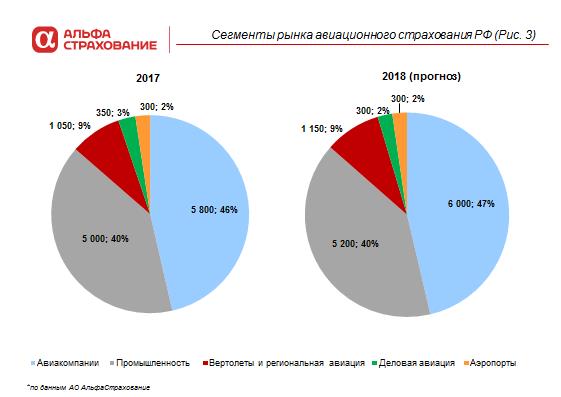 In classification, which we use somewhat less than 50% of premiums falls on the airline. This risks requiring reinsurance abroad, for which prices are essentially determined by international market.

The second largest segment is industry risks, mainly the risks of insurance companies-manufacturers, including experimental and production vehicles, but also liability risks manufacturers.

The segment of helicopters and regional aircraft looks small, its share does not exceed 10% of the total market, but this segment is vitally important, because it is here that the Russian insurers operate as insurance companies, that is, determine the rates and fully (using, of course, obligatory reinsurance) bear the responsibility.

How do we assess the risk? Increasing or decreasing the number of losses? Is aviation more secure?

Unfortunately, it must be stated that the level of safety Russia lags behind the world average and catastrophically lags behind developed countries. The absence of a progressive state policy in the field of safety and, in particular, the absence of any goals in this area means that the situation in the short term will persist. Improving safety remains 100% the responsibility of each individual operator, and operators are not motivated to work in this direction.

The regulatory and Supervisory bodies is reduced to the penalties and revocation of certificates. This activity has no positive component, such as the development of recommendations, dissemination of best practices, training of staff; therefore it is not surprising that we don’t get positive effect in relation to flight safety. Accident of An-148 “Saratov Airlines” 11.02.2018, the events preceding and the events that followed, well illustrate the General situation. Can we say that the measures taken following the catastrophe of the An-148 measures have improved safety in other airlines? Can’t!

It should be noted that the downward trend of safety as well, so we are not dealing with a deteriorating situation, and stagnant. It’s a shame that the rest of the world moves forward and we stay where were.

The transition to more modern and just a new technique to objectively enhance security, but there are specific additional risks. And, if you look from the point of view of insurance, means a significant increase in the cost of each individual loss with maintaining the frequency of minor incidents on the background of reducing the frequency of catastrophic events.

Thus in Russia there are no factors that would lead to lower insurance payments. You can argue whether the factors dictating the growth of payments. But as a conservative scenario, we must accept that the amount of payments at least will be the same. And, therefore, the continuation of the tariff reduction necessarily leads insurers from the region arrived in the area of damages.

For example, we can consider several areas where the problem of insurers are seen especially vividly.

An example of the first. Collision with birds.

The number of collisions of aircraft with birds is not decreasing, but is increasing from year to year. This reflects both the growth of intensity of flights and the lack of effective measures against bird hazard at Russian airports. Factor is the intensive development of territories in the vicinity of airports.

In 2015, the Federal air transport Agency recorded 85 incidents, in 2016 – 84, in 2017 – 111. The risk of collision with a bird does not depend on the type of aircraft or to the qualifications of the crew. And again, if you look from the point of view of the insurer, in addition to frequency, we see a frightening trend to a rapid increase in the cost of these incidents. Getting birds in a modern engine means the loss not for the tens of thousands, and millions of dollars. With the advent of new generation aircraft with geared motors millions in payments will become commonplace.

An example of the second. Helicopters. 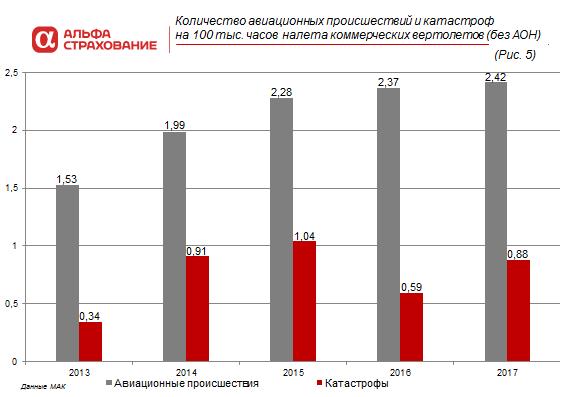 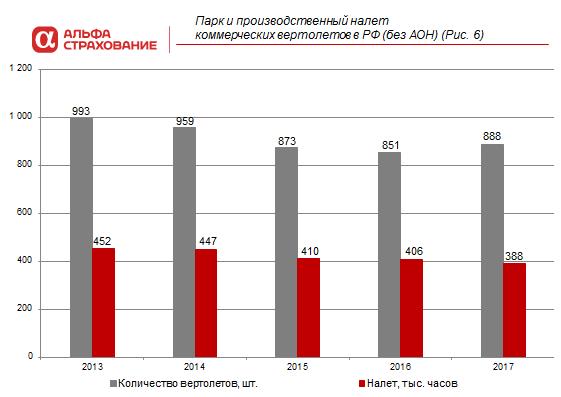 This shows that the existing rates of about 1% of the insured value of the helicopter, sufficient only to cover major incidents, but do not leave money to cover incidents of damage to helicopters, no for Agency commissions, which is quite high especially when dealing with banks and leasing companies, or for the cost of doing business. Well, about the profits insurers can firmly to forget!

Adequate rates that allow insurers to rely (without guarantee!) profit, are at a level of about 2% of the sum insured.

But in real life we see that our customers are fighting for further reduction of tariffs, and insurers in the heat of competition often willing to meet their expectations.

If we don’t want to say goodbye to your job, this trend needs to be immediately changed to opposite.

Continuing the helicopter theme, I want to say a few words about selective underwriting and common errors. In Russia there is a significant and growing Park VIP helicopters used for private and corporate needs. It is widely believed that these machines deserve a notable discount rates, as managed by professional pilots, as a rule efficiently serviced, RAID their low and customers are not inclined to expose his life to danger. Leaving today is the last – quite controversial – thesis is out of the question, I want to draw attention to the large number of aircraft accidents that occurs during the stretch of these helicopters before or after a flight with a passenger. And in Russia, and the United States, the share of these flights, referred to as positioningrepositioningб in the General statistics of accidents, is very high. And it turns out that all the arguments about low risk cease to operate: passenger on Board, he expects his car to the appointed time, controlled by one pilot. More – understandable reluctance to upset the customer or the owner, poor visibility (e.g. fog of the morning), collision with earth, a disaster.

Russian insurers have zero experience a General increase in tariffs, but it is time the experience to. Or to go out of business.

previous post {:en}The new realities of the leasing of foreign aircraft in Russia
next post {:en}SOGAZ got about half of the market aviastroenie
Back to top
mobile desktop